Anand Batra is a name that is moving up the ladders of corporate superstardom at an astonishing pace. A self-proclaimed man of numbers, Anand is a London School of Economics graduate who started off as an investment banker, has dived into venture capitalism, and of course, is currently the Chief Finance Officer here at Pepperfry.

Hmm…not too bad a record for a young man! Well, that may be exactly the reason why he is also the esteemed winner of the Business World Finance 40 Under 40 award.

But for a man obsessed with figures, how much do his interiors add up to? Well, we got a chance to put all our curiosity to rest with this edition of Home Invasion, which featured Anand Batra and his minimalist bachelor pad.

From the moment we stepped inside Anand’s home, we knew we were in someone’s abode who knows exactly what he is doing. After all, his home interior was screaming ‘Organization’! Minimalist charm, meticulous planning, and simplified elegance are some of Anand’s key personality traits that were equally reflected in his house.

For sure, Anand knows a thing or two about taking stock of unnecessary expenses in finance. But who would have thought that he would use the exact same insights to nail the minimalist ideals in his house? In fact, throughout his house, we could not find a single thing that did not serve a purpose. No unnecessary frills, simple genius!

If we ever ask Anand about his number one tip to maintain high standards in productivity, “Stay organized,” he always says. It only makes sense that a clutter-free and organized home is one of his secrets to staying on top of his mental game.

His home also made excellent use of lighting, space, and objects to create an element of restraint in the interior decor. With light color palettes and only the bare essentials in the room’s furnishings, the individual voices of each one of the objects stood out. Was it Marie Kondo designing his interiors or what, we wondered? Well, no. That credit goes to our own home invader and design specialist, Aesma! 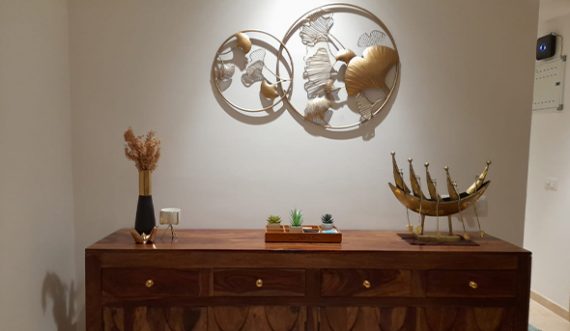 Who said that corporate CFOs are way too nerdy to include glamor in their living rooms? With gold accents, accessories, and lighting, Anand’s home displays a subtle kind of style. We will have to admit; it’s pretty much like Anand’s personality in the workplace!

The gold-framed accessories and the bronze curtains do an excellent job of reflecting light and making the room feel a lot larger. It is also interesting how Anand uses only a few decor elements with golden accents, such as tabletop pieces, to elevate the room’s design without giving an overpowering appearance.

We also loved the way Anand used art decorations and portraits as accents in his rooms. He made a point of using small and subtle doses of gold in his interior design to give it an overall unity. While staring at the chic tripod lamp with a golden frame, we can only wonder what the living room looks like during the night!

The choice of furniture made the living room nothing short of a minimalist masterpiece. With lots of flat surfaces and clean, defined lines in the coffee tables and cabinets, the room was extremely soothing to the eyes. And Anand has even managed to avoid too much modern sophistication with a jaw-dropping blue sectional velvet sofa.

Insider tip: this was actually the place where Anand was chilling before we barged in on his privacy!

Guess what else we saw in one of Anand’s rooms: a magic corner of inspiration. With a nice one-seater sofa alongside one of the windows with a view of nature that is a sight for sore eyes, we finally realized where Anand’s Zen-like calmness comes from.

Next, we move on to his small-but-sleek workstation. With limited elements on his work desk and a swivel chair, we immediately realized that all Anand needs to get on with his work is some motivation.

And guess where that comes from? Right above, from the Gunners wall. Did we mention that Anand is also a die-hard Arsenal fan? The wall boasts of some of the most iconic Arsenal moments in Premier League history as well as their memorabilia. Well, with his favorite club topping the League Table thus far in the season, we are pretty sure that we have got a happy CFO!

Well, we can not thank Anand enough for letting us take a sneak peek inside his bachelor pad and its impressive interior. Having said that, we could actually do without Alexa’s compliment next time around!

And if you, too, want to grab the same Pepperfry furniture so highly adored by Anand, just go to the Pepperfry website today for the widest range of products and creative decor ideas.

Get Special Offers and Deals, Subscribe Now!
Sign up with your email address to receive news and updates!

5 Ways to Incorporate the Color of the Year in 2015

5 TV Console Units That Make Your Living Room Stand Out

How to Create French Country Style in Your Home